Bhugaon: “I keep on thinking what to do next, how to feed my children, what the future holds for us, ten acres of fertile land watching it turning into a barren land breaks my heart,” says Neurutti Satone, a farmer of Bhugaon village.

Nerutti stays in the village of Wardha district, Maharashtra. The village has a population of 2200, out of which 700 are engaged in agriculture. What differentiates this village from others in Wardha district, is that it has a massive steel plant- Uttam Galva.

Mahatma Gandhi’s famous Sevagram ashram is just 10 kilometres away from Bhugaon. In direct contrast to the Gandhian principle of self-reliance, Bhugaon, which was self-reliant for its water, now has to purchase water for drinking and daily needs.

Mahadev Dhupte, the Upa Sarpanch of the village, says the village is deprived of clean water and they need to buy their water through a government scheme called ‘jevan pradhikaran’ a scheme by Maharashtra government to provide water in villages.

“Our lands are having white precipitate on it, we cannot grow vegetables in this land now as they are not good for health. Earlier we used to grow vegetables and it was a source of income for us,” says Mahadev.

Neurutti says that their domestic animals have no water to drink. “If they drink water from the canal, they fall sick, cows don’t give quality milk which was our income source earlier,”he adds.

He recalls an incident where a buffalo sat in a canal and its skin got burnt as the water was acidic.

Private testing results of canal water shows that the red colour is due to excess amount of iron oxide leaving its pH (potential of hydrogen) value 5.58, which is acidic.Health is a major issue in the village, around 30-40 per cent children were born malnutritious between 2016 to 2019 according to data given by Anganwadi. Women is this village have had multiple miscarriages.Village has never seen cancer but one man suffered from it. Others faced skin rashes, Asthma, stomach pain, piles, even Kidney stones.

“We have done a lot of agitations against the factory, these problems first came into notice in 2009, since then we are fighting. In 2013 we gathered all the documents and complained against the company, went to every official but with no hope,” says Ravindra Shahu, a social activist and resident of the village.He further alleged that all politicians, from the ground level to the top level, were involved in this.
Ravindra also remembers threats which he used to get regularly by the factory officials, “They used to say: We can kill you just by giving two lakhs to a truck driver and you will be dead, stop whatever you are doing.”

Shahu along with few other villagers collected water from all five villages around Uttam Galva– Selukate, Bhugaon, Chitoda, Badbadi Nijapur–and tested the water in private labs and submitted the reports to collector Ashutosh Salel.
Committee constituted by the Collector in 2016 to inspect the matter found that the water, soil and air pollution in the area could be attributed to the steel plant.

Then Ravindra Shahu along with the villagers started agitation against the factory. Their demands included development of villages, pollution control, jobs to the local people and clean water to drink. With officials now supporting them, villagers of Bhugaon were successful in placing a water treatment plant in the factory along with air purifiers in their chimneys.

However, these good times only lasted for two years. Now, the villagers are back to inhaling the smoke coming out of the steel plant’s chimneys and water is still red. 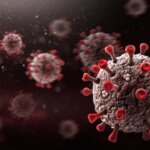