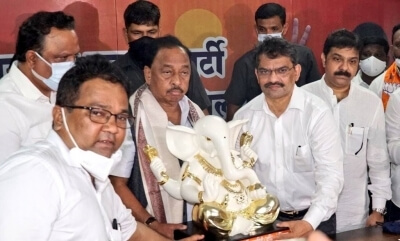 Union MSME Minister Narayan Rane on Friday resumed his ‘Jan Ashirwad Yatra’ — abruptly suspended after his arrest, magisterial custody followed by bail on Tuesday — and launched a vigorous attack on the Shiv Sena, which retaliated in equal measure.

Simultaneously, Chief Minister Uddhav Thackeray and Bharatiya Janata Party’s Leader of Opposition Devendra Fadnavis were closeted in a private meeting in Mumbai, sparking off political speculation of a possible truce between the now-warring ex-allies.

Continuing to breathe fire aggressively despite a soar throat, Rane said that the Disha Salian case has not yet ended and threatened to “expose” the Sena ‘bit-by-bit’ over the coming days.

“What did they achieve by arresting a Union Minister like this,” Rane asked in an apparently anguished voice, adding that after his health improves, he would again hammer the Shiv Sena.

Hitting back, Shiv Sena Lok Sabha group Leader Vinayak Raut — who wrote to Prime Minister Narendra Modi demanding Rane’s dismissal from the Union Cabinet — said even his party “would unmask Rane” on various issues including the suspicious death of his distant relative Ankush Rane in April 2009.

The party’s newspapers, ‘Saamana’ and ‘Dopahar Ka Saamana’ had on Thursday demanded to know “who was responsible for the disappearances of persons like Shridhar Naik, Ramesh Govikar, Satyavijay Bhuse and Ankush Rane (Narayan Rane’s distant cousin)” and demanded a fresh probe into these cases by the Maha Vikas Aghadi government.

“Even Fadnavis has raised many issues in the past… All we have to do is to order a re-investigation into these cases,” warned Raut, accusing the BJP of foisting Rane only to “corner the Shiv Sena by hurling false allegations”.

Undeterred, Rane attacked the ruling MVA government, saying it has done nothing for the people of the state in the past two years, no aid has yet reached the flood-hit people of Konkan and western Maharashtra, while the farmers and ordinary folks continue to suffer.

The central minister assured that he would take up the cause of the (coastal) Konkan people, especially the mango, cashew, and other cultivators who lost heavily due to the recent floods, with the Centre and try to get maximum help for them.

Rane’s ‘Yatra’ had come to a grinding halt on Tuesday after his sudden arrest midway, from his camp in Sangamner, in connection with the ‘slap slur’ against the CM Thackeray, which sparked off huge protests all over the state and counter-protests by the BJP.

He was taken to Raigad and produced before the Mahad Court Judicial Magistrate First Class S.S. Patil, who upheld his arrest as “justified”, sent him to Magisterial Custody for 10 days till September 4, and later granted him conditional bail the same night.

This has made him the first Union Minister to be arrested in the past 20 years, and only the third in the country so far, after the Chennai Police in 2001 nabbed DMK’s Murasoli Maran and T.R. Baalu, both former Union Ministers in the government of the late Prime Minister Atal Behari Vajpayee.